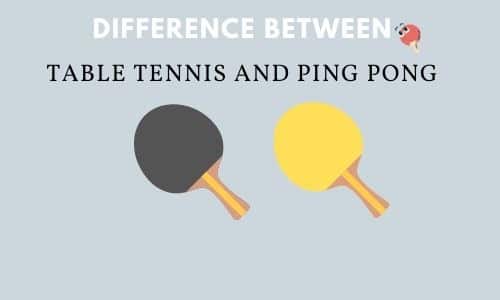 One evening, while playing table tennis with my wife, she asked,” What is the difference between table tennis and ping pong?”

Well, I knew a little… but I was thinking…..

My 7-year kid, by this time, replied, “We play table tennis at the recreation center and we play ping pong on our dining table”!

We laughed out at the silly answer but it seemed true in one case: formal vs informal.

Let’s explain: Ping pong is a parlor game played casually in the garage or home. While table tennis is an international sport played formally and regulated by USTTA & ITTF.

By the way, right after then, I studied more about this and have written this article that describes the other few distinctions between these two.

Believe it, I started this game on our dining table! The table is 5” in length and 3 “ in wide” (not a standard one). We didn’t follow any hard and fast rules. So, you can say this is a Ping Pong game.

But, to play table tennis, you need to have a standard-sized table and must follow the rules. (Here you find the standard size of a table)

But, the ping pong players use the paddles made of sandpaper.

Sandpaper paddles don’t provide much speed and spin with the ball. Therefore, the ping pong game remains slow and the rallies are longer than we see in table tennis.

What about the price?

Well, table tennis paddles are higher in price than the sandpaper paddles.

Check out the Price here:

In terms of ping pong, players usually play with yellow balls. Whereas in table tennis, both white and yellow balls are seen on the table.

Another difference is that the ping pong balls are a little bigger than the table tennis balls.

While table tennis is branded, the ping pong is not.

Jacques, in 1901, trademarked the name “Ping Pong” so that the rivals cannot adopt the name. Slazenger remained with Whiff-Whaff, the early nick-name of the game. Gradually and finally, “Table tennis”  came into existence as an official name. Though this name is commonly used all over the world, the traditionalists still love to call it “Ping Pong”. (Check History Here)

Spin is another mentionable difference between these two.

The amount of spin is very little in ping pong as the players use only sandpaper paddles. On the other hand, table tennis participants get a huge spin on their play as they use different spin generating paddles.

Since table tennis is professionally played, you can see players trying different types of serves. However, Ping pong players don’t attempt many.

In table tennis, prior to hitting the ball from behind the table’s baseline, players must start throwing the ball more than six inches upwards from an open palm. Also, they must be careful not to extend beyond the right or left of the sidelines when they serve.

In contrast, the ping pong players don’t need not follow the rules or they can serve the ball straight out of the hand as they like.

I am waiting for the Olympic show 2020. If you are like me, you will see the name table tennis in the event, not ping pong!!

The winner must win by a two-point margin. And in ping pong, it’s 15.

You can win a ping pong match after reaching a certain point with the opponent scoring no point. However, in table tennis, it’s not like that.

It wonders me when I have found in google that China is best in table tennis and It’s South Corea who is dominating the ping pong.

The ball in the game must be clearly seen all the time. For that, Since the ball’s color is white or yellow, the table tennis players can’t wear the same colored shirts or pants. However, in ping pong, the players don’t follow any hard rules for that.

If you are a ping pong lover, a good option for you is to pick some fun options for this game. These are:

( Get the full idea here:
https://serenityhealth.com/blog/3-different-ping-pong-game-variations/

However, in table tennis, you would not find anything funny variations like this.

No matter whatever you say Table tennis or ping Pong, both are almost the same in terms of playing style, rules, and strategies.

However, my wife and kid both have already got an idea about the differences between table tennis and ping pong.

If I missed any point, please let me know in the comment section.