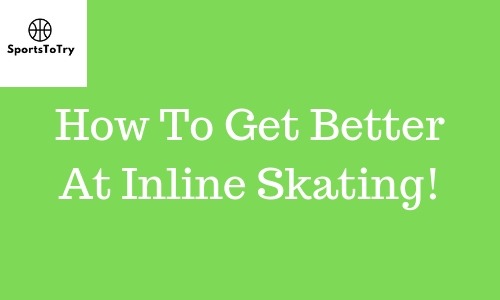 A Cognitive Approach On How To Get Better At Inline Skating

Watching the people of all ages gliding through City Park, Town Hall, and Rail path is really amazing. How do they maneuver? Is it a work of art? Or, something else. A few utter, “Science for sure”.

Inline skating is an art and science as well. To put it simply, it is all about keeping the body balance thoroughly. But, how to get better at inline skating-this is a burning question among the skate-lovers.

Think of a toddler trying to march at the very outset. The opening stance was not as bright as expected. In addition, the more an infant practices the more it becomes easier for him to cope.

Getting the right kind of balance is the impediment in culturing inline skating. Initially, to be a better inline skater it is mandatory to learn how to develop balance. But before that, make sure to carry the right kind of gears: best skates, helmet, elbow pads, wrist guards, knee pads and finally journey begins! Let’s look some,

Stand Staunch To The End

Primarily standing on skates could be pretty interesting. A grassy soft surface would be a nice one to start off with. Walking through this patch wearing skates provide enough grip so that you won’t begin to roll. This is the finest way to practice your balance before you get started. Stand straight on your feet and about four to six inches apart. The arms should be slightly in front of you and the knees bent. The balls under your skates will take your weight keep the overall balance intact. Don’t try to stand straight with your knees and don’t keep your balance on your heels. Our body has diverse moving parts; so, in order to skate, we need to control.

Start skating for the first time feels like you are skating with a slippery pair of shoes. By the way, skating is not “moonwalking” at least. Undoubtedly, it is easier than a moonwalk. Maintaining the bodyweight on the top of the skates is the key. Before get rolling, try to take some watchful small steps.

Hold Your Breath And Use Your Hands

Rolling for the first time would be nervy and adventurous as well. Like a toddler using a walker, a beginner needs support to hold on either side: rails on both hands or to have two walls of a narrow passage on both sides.

Learn how to glide through when you have mastered walking with your skates. Push your one foot forward and keep gliding. Rehearse the inline skating tricks. Here the trick is shifting weight on one foot to another and replicating the same thing again and again.

After getting used to skating a bit, try to go for a slightly slant surface and roll on until you stop. Each time use an extra pace to persuade your sense of balance with movement. It requires rigorous training to be a better inline skater.

The proper posture is the most important starting point to skate. To keep a perfect balance, try to remain your knees bent and use your hands to help yourself at the time of skating. While skating always look straight ahead and keep your head up. Be vigilant at all times. Practice until you feel comfortable in maintaining balance consciously. In inline skating, the combination of three to five larger wheels ensures that your wheelbase remains very short and agile, unlike the traditional long frame speed skates. This promises to retain the maneuverability.

I hear many people tired of asking, “how to get better at inline skating”. My sober request to them to see the skaters keenly before questioning. Lean, lean, lean! Try it and you will find your many problems fly away. Bend forward a little from your waist and put your arms out in front of you to master the balance. The arm movement is very much significant in skating. Keep in mind that every trick might take a couple of weeks for reaching perfection.

Bodyweight is another measure to concern with. Being a better inline skater, it has been a tough call to make the chemistry between foot movement and body weight. This requires the inline skater to uphold a weight distribution. The straight lines belong to skate line up your body weight. Henceforth, proper weight distribution is an ideal way to meet up the balance. Here comes the idea of the center of gravity- aligning your body weight to attain balance.

Know How To Employ Wind Speed

Skating with the wind or against the wind keeps you busy computing the wind speed subconsciously. Here own force and wind speed will be the key factors to carry on smooth skating. Otherwise, you may find the rest of you down. In skating, the whole bunch of science tricks is functioning but still, all you need are the inline skating basics to follow.

The balance between two legs is must as you glide through. When you raise one foot forwards – push away with the other foot before you lose your balance. At the same time shift the weight from your back foot to your front. While you make an effort to retain your balance, you will definitely notice that the feet are moving apart. Be balanced and strive to bring the feet in a closer position. A growth chart will undoubtedly pose a positive note.

On the whole, be relaxed on skate because it is the greatest way to keep the focus on your technique and skate better in the coming days.

Inline skating, also known as rollerblading, can be expressed as an artistic performance. On the other hand, the motion of rollerblading hinges on pure physics. Newton’s law of motion immensely depicts the sheer fundamental physics of inline skating. Though skating promotes a healthy, energetic outdoor lifestyle, it can be hazardous as well due to some risky movement. So, we need to deal it with caution.

Basically, the heart of skating ability is a balance. Losing balance results in missed tricks and falls. It will be a great help if you get the ability to keep balance by born. Nevertheless, practice after practice can improve your balance. Here the center of gravity plays a dynamic role. So, you need to adjust the center of gravity to maintain the balance.

Eventually, you will find your learning curve moving upright ahead. Bridging the gaps and you arrive at a position where you no longer need help in skating and find your body and skate moving in such a motion that you’re able to achieve balance sooner. Moreover, you will get the answer on how to get better at inline skating.

Certainly, you will not prevent yourself from going on inline skating guaranteed to give you an adrenaline rush.