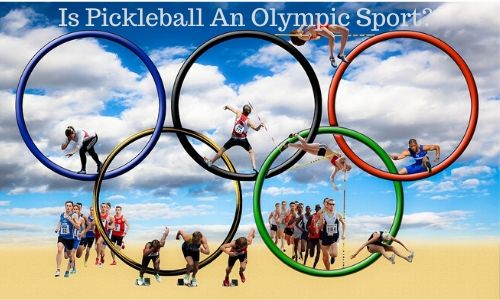 I have frequently heard the pickleball players asking whether the game is in the Olympic event or not. So far, that’s an interesting question in the pickleball community.

Is pickleball an Olympic sport? No, it’s not.

In short, though Pickleball is popular in the USA, it’s not that much in many other countries around the world.

To get the whole idea of why this pickle’s game is not there, you need to go through this article till the end. And, you will also know the steps any sport must go through to participate in the great event.

Why Pickleball Is Not In Olympic?

There are some requirements set by IOC to include any sport on their list. One of the main conditions among those is:

Unfortunately, Pickleball does not meet the criteria yet.

What Kind Of Sports Pickleball Is?

Paddleball Sport, Wiffle Ball, Peculiar Name, and The Kitchen– all these terms go for this game of pickleball. It is played on a tennis-like court, or you can say badminton-sized court with almost the same types of equipment (Pickleball paddles, net, and plastic balls). The combination of badminton, tennis, and table tennis is it’s another popular definition.

Though the above three sports are in the Olympic, Joel Pritchard’s invention is not there.

However, how popular this health-beneficial game is around the world?

Well, we have found in the USAPA website, the SFIA states that pickleball at present has 3.1 million players in the US, which is a growth of 12% over the previous year. Other than the USA- Canada, the United Kingdom, France, Spain, Finland, India, etc. play this sport regularly. But, it’s not much in number that can satisfy the IOC.

Get the complete idea of pickleball here: https://www.usapa.org/wp-content/uploads/2019/02/2019-Pickleball-Fact-Sheet.pdf

With the motto of “Discovering Tomorrow,” how excited the Japanese can be in 2020!

Summer Olympic 2020, the grand sports event, is going to be held in Tokyo, Japan. It’s almost nearer, and the whole world is now calculating days for the show. As a sports fan, I am also waiting for it impatiently.

The most thrilling part of the forthcoming Olympic event is that it adds five new sports this time. Karate, Surfing, Skateboarding, Sport Climbing, and Softball/Baseball are the new ones. These will surely grab the world’s attention and increase the joy for all.

Want to know more about the coming event? Check:https://tokyo2020.org/en/

How And When IOC Includes Any Sport In The Olympic Event?

The whole process of the inclusion of any sport is as follows:

Recognition: The game must be recognized as a sport by the International Olympic Committee. (IOC)

Administration: The IOC requires an international non-governmental organization to look after its administration, which supervises at least one sport.

IF Status: After recognition, the sport then gets the International Sports Federation status.

Anti-doping code and Olympic charter Rules: At this stage, the international organization that oversees the sport must implement the anti-doping code of the Olympic movement, including performing successful out-of-competition checks on the athletes of the competition and upholding the Olympic Charter rules.

Submission of Petition: To become part of the Games, the IF of the sport must apply for admission by submitting a petition setting out its eligibility criteria for the IOC. In one of three different ways, the IOC can then admit an activity to the Olympic program: As a sport (Triathlon), as a discipline (a branch of a sport: Women’s Wrestling), as an event (Pole Vaulting). Rules for these three ways vary a little, but the intent should be the same.

Value and appeal: The event or sport must increase the value and appeal of the Olympic show. Also, it must reveal and maintain its modern traditions.

Other Issues: The Olympic committee does not allow any pure mind games. The sports dependent on mechanical propulsion don’t get permission. For instance, the mind game “Chess” is out of the list due to the above two reasons.

Will Pickleball Make Its Olympic Debut?

As we realize, it’s not an easy way to participate in the Olympic party. Though pickleball is spreading rapidly around the world, it hasn’t yet reached its required level.

What the International Federation of Pickleball can do is to take steps to increase the popularity of the game. It can also inspire the tennis players to try this sport on their known courts.

In a nutshell, arranging more events, sharing through YouTube, and social pages can be other ways to enhance the acceptance of the game fast.

However, at present, it’s mainly a USA game. Increasing popularity in other countries is essential to improve the acceptance of the sport. However, if the game can retain its current trend of demand, we may see it in Olympic 2028 show.

Have A Video On This Topic

We know other racket sports, i.e., tennis, table tennis, and badminton are enlisted in the Olympic event. So, why pickleball will not be there with the same types of rules, styles, and equipment!

As a pickleball fan, we can play the game more and enjoy and share it with the world as much as possible.