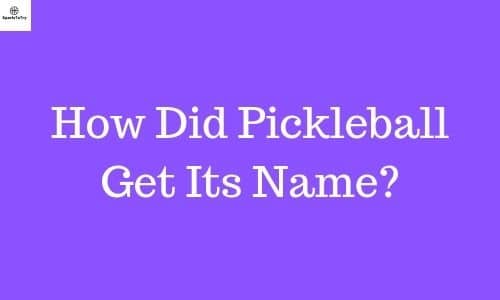 A Dog On the Boat!

Anyway, an active bunch of people were busy playing a funny game back in the old badminton court. This fun game was then called nothing. Later on, the game got a hilarious name “Pickleball”.

But how did pickleball get its name is truly a mystery for sure. Name after a dog, a widespread story is sometimes challenged by few who supports a “boat story”.

However, going back to the pickleball history will give a hint of huge dilemma about the origin of the name. If you want to learn more about pickleball, try the History of Pickleballor other books of this game.

Pickleball, since no pickles are used, is the fastest growing sport in America. Though, many people still get fun of it due to its hilarious name. Combination of tennis, ping pong and badminton makes it more interesting to the community throughout the nation.

Bainbridge is a summer vacation home for many. The game began its journey as just a kid’s activity for Bainbridge Island families. It has continued to grow to a large extent and now turns into a well-rounded activity to the mass people. Some tennis lovers are now playing this game on their tennis courts.

Nowadays, the huge response of the community makes pickleball a massive commercial success from a simple recreational family game. In 2015, the 50th Anniversary celebration of Pickleball was truly an occasion to recall what is pickleball named after.

How The Name Came To Be

The game had no official name for several years. Hence, the inventors felt the urgency to put a pleasant name. The argument begins! And finally, they came up with a name that sounded funny indeed- “Pickleball”.

Surprisingly, we do not confirm the proper origin because we sought out two different story-telling from the founders. The most popular version of the story is related to a dog whereas the other version is based on a boat.

Both the narrators place their arguments in different interviews claiming their version is the accurate one.

The pioneer families of inventing the game are Joel Pritchard and Barney McCallum. The Pritchard family came up with a boat story and McCullums illustrated the dog story. (Check this out)

Back in 1965, on the beachside badminton court area four families predominantly the Prichard’s, the Brown’s, the McCallum’s and the Bell’s used to pass their weekend lazy time.

Once, on a typical bad weather day, the kids were driving the adults crazy. The dads began to fire up and Joel Pritchard hunt around the junkyard to find something that would entertain the kids. He ended up with shattered paddles and perforated plastic balls and told them to play with those on the badminton court.

However, the kids were busy playing this game in the whole summer. In the meantime, Joel Pritchard’s daughter adopted a cockapoo puppy from their neighbor. The Pritchards named the dog “Pickles”.

Brown family also had a cocker spaniel named “Lulu”. Pickles slowly developed a habit of picking up the plastic wiffle ball by picking it up with its mouth and loved to run off with the ball in the court.

The inventors did not think about the game would even stick around all through the first summer. The game was getting so popular even among the adults that they were excited to name it urgently.

Once sitting in the living room of the Pritchard’s cabin, the McCullum family, as well as Brown’s, still remember that night. They unanimously named the game after the dog.

Finally, the families decided on the funny name “Pickleball” in tribute to the adorable family dog. The families even confirmed the excitement that went through them that night was really overwhelming.

Later on, the Pritchard family completely disagreed with this “dog story” and justified their argument on behalf of their statement. Rather, they opened up a new avenue that exposed how did pickleball get its name.

It was a simple “boat story” where the inspiration behind the name was a “pickle boat”. Bainbridge, a sleepy island, is known for its boating culture.

Joan, Joel Pritchard’s wife, confirmed several times in different interviews and written statements of West Virginia News and the Sentinel Newspaper about this maritime pursuit rather than a pet dog.

According to Frank Pritchard, son of Joel Pritchard, also gave testimony on her mother’s proclamation admitting the fact that her mother was a competitive rower on the island.

On the very outset, she did not have any idea about “pickle boat”. Soon after that, she came to know about the weakest and slowest vessel in a race referred to as “pickle boat”.

From that note, the game “Pickleball” was named after the boat because the game reminded her of a pickle boat.

The name “Pickleball” has been justified perfectly by this statement.

The inventors behind the game are responsible enough for spreading the dilemma over the name.

Both Joan Pritchard and her daughter Peggy Pritchard-Olson quoted the dog story as fabricated. They were pointing out the fact that “Pickles” was not a part of the family around two years after the game was first invented.

Moreover, Joan Pritchard claimed in the print media- Sentinel and News that the game was not named after the dog but in fact, it was the other way around.

The well-known politician and U.S Representative from Seattle, Joel Pritchard quoted in the oral history deflating the “Pickles story”. Recently, Barney McCallum retorted in an interview, “Everyone involved knows the name came from the dog.”

After impartial research, it is more likely that “pickle boat” is the original source of the name leaving the “dog story’ aside as the least reliable one.

More importantly, once a reporter published a national story on this game emphasizing on the “dog story”. After that, several other newspapers repeatedly make the dog center of this sport’s history leaving behind the vague rowing term.

Therefore, the widespread notion of pet story persisted regardless of the consistent rejection of the Pritchard family. Moreover, the “pickle boat” was not simple enough to explain whereas the cute puppy story attracted the mass people and spread through word of mouth.

In addition, they focused on where did the name pickleball come from and why do they call it pickleball.

Knowing the truth, the Association kept mum and showed a negative attitude towards the actual origin of the name. They got to stick to the most powerful myth.

At the inception, Pickleball was strictly part of a family recreation. It is a great workout and a social sport nowadays.

Today around 2.5 million people are involved in playing Pickleball in the USA. From a kid’s activity, the sport has continued to grow nationwide. The reason behind it was the inventors’ business motif and political influence.

For instance, in a political event of Congress Joe arranged Pickleball game. They knew exactly how to sell the story. As a whole, pickleball’s success is based on the inventors’ abilities to spread the game.

Unlike other racket sports: tennis, badminton and table tennis, people make fun of pickleball due to its childish sounding name. This is the main reason for having poor attention and lack of widespread acceptance of this game.

Few people advised to change the name like other serious racket sports: tennis, squash, badminton. In line with this consideration, Joel Pritchard once proposed “Tenny Pong”​ as a possible name. This really indicates the mass outlook towards the name of one of the inventors.

The End: Let’s Celebrate The Game

Regardless of dog and boat story, whatsoever, the ever-increasing popularity of pickleball blurs the statement- how did pickleball get its name? This fascinating sport now knocks outside US and Bainbridge Islanders feel proud of it.

Hence, Pickleball and Glow Pickleball can bring us together to celebrate the community as a whole.

Even after over 50 years, the journey of pickleball is still the same with pride and popularity. Thanks to those preachers who worked hard relentlessly from behind to make this game a true event.