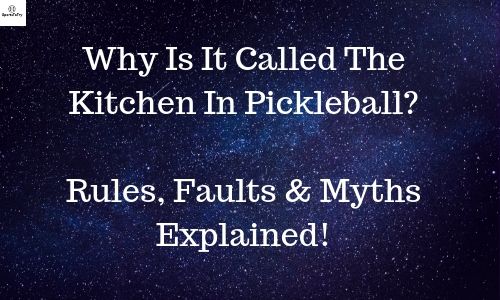 When I heard the term “Kitchen” in pickleball for the first time, it confused me a lot! Do the players cook here?

Why is it called the kitchen in pickleball then?

Meanwhile, I started playing pickleball with my friends at a local badminton court. On the very first day, I made an error out of ignorance! Luckily, it happened around the kitchen area.

Then, researched as curiosity grew and finally, I am well acquainted with this unusual term and rules of the game by continuing to play pickleball.

The kitchen, known as the non-volley zone, is the key area in pickleball. The new players may be hesitant about this, while the smart players can make the most of it using their paddles.

Let’s Clarify Why Is It Called The Kitchen in Pickleball:

It is possible that the term “Kitchen” in pickleball is taken from the shuffleboard game. It has the same area called “10-off” and as a rule, if the pucks land in this location, you lose 10 points.

Since pickleball holds the same rule of losing points around this zone, it’s likely that the sport borrows the same word “Kitchen” from shuffleboard.

In a nutshell, The Kitchen is the nickname of the Non-volley zone in pickleball.

We should begin with the measurement of this zone. Even though I mentioned in another article, recapping with the information is crucial here.

“The non- volley zone is seven feet on each side starting from the net.”

As we move on to further details about the rules, myths, and faults, we need to have an idea on the following two queries:

What is a Volley: A volley is hitting the ball before it bounces on the ground.

What is the Non-volley Zone: The non-volley zone is only the flat surface of the zone, not the 3D space or the air above the area.

What Are Permissible In Non-Volley Zone:

There are some misconceptions or myths about pickleball kitchen areas. Let’s debunk those myths:

1. You cannot step into the kitchen until and before the ball bounces.

2. You must get out of the kitchen right away (How long can you stay in the non-volley zone?)

Clarification: You need not get out of the kitchen right away. You can stay there as long as you want until breaking any rule (until hitting any volley).

3. Only one partner can stay in the kitchen at a time.

Clarification: You and your partner both can stay in the kitchen at a time. But the matter is, no one of you can hit a volley until the ball bounces and also no one of you gets hit by the ball.

Now let me share two great video tutorials on the above topics:

Wrapping Up With Some Jokes:

The answer to the question as to why is it called the kitchen in pickleball is still a controversy. People are still making yarns in the Pickleball Forum, and some of them are:

“It’s where you shake and bake”!

“Cause if you stay in there too long to make cookies, you get burnt”!

“Because when somebody goes in there illegally, I always ask for a sandwich”!

See, people enjoy making jokes about it. According to my research and study, the most reliable source to call it “Kitchen” is from the game of shuffleboard so far. So, let’s stick with that.

However, the jokes and the mystery behind the jokes are the only trivia. The more significant aspect of this article is to illuminate the kitchen area’s rules, faults, and myths. Let’s honor the rules and follow them. While playing, be vigilant about the faults of the kitchen or the non-volley zone. It will certainly keep you ahead in any pickleball play.