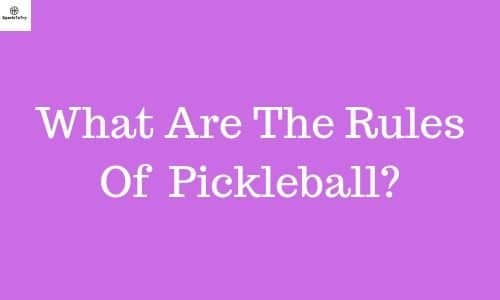 Pickleball is a cool name and game!!

It has been an exciting sport in the US for many years. The sport steals almost similar rules from tennis, ping pong, and badminton. Still, it has some unique principles of its own. If you are fascinated and thinking to move into the court recently, you must be looking for what are the rules of pickleball.

Some of the rules are basics and some of them are complicated for sure. But, being familiar with the ins and outs of the sport, you will not only make yourself more confident on the ground but also you can increase chances to win the battle (believe me!)

There are so many resources on this topic, “The Rules”. You can search google or youtube for what you need. But, we suggest you go through the main source of pickleball rules, which is USAPA (Link is given below). However, what we have done here is highlighting the more significant ones in a different way.

What About the Court:

Well, first of all, you can play pickleball on any badminton sized-court. And, if you want to play it on a tennis court, you must resize it with the proper dimension.

Serving is an easy and simple task of pickleball. But if you are a beginner or want to know more about basics, the following points are to be kept in mind.

You may ask what are pickleball rules in total service? These are as follows:

we haven’t talked much about scoring rules here. If you are interested to learn more, read a complete article on this topic.

Non-Volley Zone (Rectangular shape; 7 feet each side from the net):

The zone is well known as “Kitchen” and the rule is made to lessen the chances of injury by cutting down the number of smashes. It also helps to make for longer rallies.

As we have a complete article on the rules, faults, and myths on this topic, we are moving into the other rules of this game.

Some Faults in Pickleball:

You and your opposite team will decide by a fair method which team will have the first choice of side, service or receive.

Clothing rules of pickleball is not that formal like tennis or golf unless it’s a tournament game or played on a center’s court where there are some rules of their own. However, some of the vital suggestions are given below:

Before finishing, we can have a video on the most misunderstood rule of Pickleball described by a certified referee of USAPA, Mark Peifer:

If you are already getting tired of reading what are the rules of pickleball, just start playing casual games with your family and friends. After a certain period of time, all these guidelines will seem easier for you.

Surely, pickleball is an entertaining game that can be played on almost any perfectly sized court; indoor or outdoor, with some common equipment. So, let not these rules hinder your enthusiasm to move into the court for playing this beautiful game!